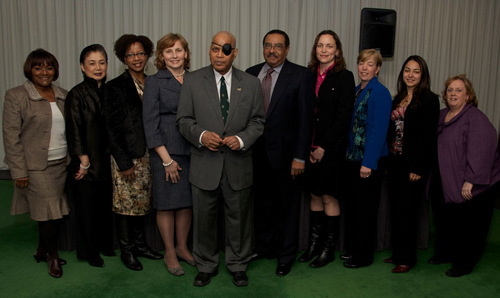 Frustrated as a pioneering black actress on a major soap opera by limited make-up options, entrepreneur Vera Moore launched her own cosmetics company bearing her name.  She targeted her products at women of color, “from ivory to ebony,” she told attendees at the National Minority Business Council’s Women’s Entrepreneurship Panel and Networking Event, March 31st. in New York City. (www.nmbc.org)
Moore said that weighing risks and rewards needs to be taken into account when running a business. “Entrepreneurship is not for the faint of heart.  But if you want to do it, follow your heart,” Moore told the audience of mostly women business owners and college students from Monroe College.  Monroe was a sponsor of the tribute to Women’s History Month, in conjunction with BNY Mellon, the event host, and Asian Women in Business, a business networking group.

Moore said her first major business risk, after founding her company, was becoming the first minority-owned kiosk operator at the predominantly Caucasian Green Acres Mall in Valley Stream, New York. “That took two years to negotiate and they stuck me on the second floor, even after telling me I would get a first floor location,” Moore said with some frustration but more determination in her voice.  “But twelve years later, we’re still operating out of that mall.”

More recently, she was presented with an opportunity to have her cosmetics line featured in a major department store.  But even after upgrading all of her packaging and merchandising requirements, the deal feel through.  “We were rejected and I was left with a major loan obligation,”Moore confided to her audience.  “Risk vs. benefits.”  But a month later, I was invited to meet with Duane Reade which had all of the same qualifications.  This time, my product line was accepted and we now have the potential of going national.   “One door closes, another opens.”

Cheryl Duncan, founder of a public relations consultancy practice based in Jersey City, NJ said that despite being in business for nearly 20-years and representing a wide-range of high-profile clients, including celebrities, she still finds she has to explain to people what she does for a living, including her own father.  Like many small business owners Duncan is a heavy user of social media tools for self-promotion.  “I now have a constant way of letting clients and prospects know what I am up to.”

Since starting her business five years ago, Yasmin Cruz has since come out of the closet, literally speaking.  “My closet was the only work space I had for setting up an office. So I emptied it out, put up some shelves and got a computer,” said the owner of Image Marketing, Inc., a promotional products and events marketing company.  Cruz is also a heavy user of social media tools but she cautioned her audience, “never lose that personal touch.”

Kelly Solon is an architect, new business partner with her husband in their recently formed joint venture, Murdock Salon Architects, New York, and the mother of three children under the age of two, including twins.  “It’s very important to make time for yourself for health and fitness, especially in New York where women are judged on how we look, “Solon advised.  “Also be really clear about why you want to start a business and use professionals to set up all of your agreements,” such as the merger she has with her husband’s business. “It’s especially important to have structural agreements with spouses and family members.”

Rounding out the panel was Saori Kawano, president of Korin Japanese Trading Corp., an importer of fine Japanese tableware and chef knives. Kawano’s one year backpacking adventure to the United States as a young adult expanded to three years after she and her husband gave birth to both a child and a business. But after the 9/11 attack, her company was located in a frozen zone for four months.  It was only then that she became actively involved in the American community and business networking groups, including the National Minority Business Council.  She also became an American citizen.   “But my worries and fears back then were nothing compared to those of the recent earthquake victims in Japan,” which Kawano said has impacted her business.  “I have spent all my life building the foundation for my business. But you have to keep changing as the market changes.  If you can do this, you will always find a way to keep your business going.”

Ben Jones, chairman of NMBC, closed the event by emphasizing that being an entrepreneur is a 24-hour job.  “You have to be prepared to put out and be flexible.”  NMBC will help more entrepreneurs get more prepared for unforeseeable challenges and opportunities with its next event, the NMBC Annual Procurement Opportunity Luncheon, April 20th.  For details on this event call 212-693.5050.